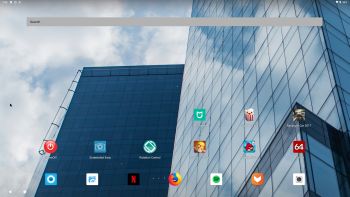 NEWS 190326 about AndEX Pie 9.0
My new build of Android x86_64 – andex_x86_64-pie-9.0-aptoide-netflix-spotify-clashofclans-1650mb-190326.iso can be installed to hard drive or on a USB stick. You can also run the system live. I.e. from a DVD or a USB stick. On some computers you’ll have to start up AndEX 9.0 in compatibility mode (VESA) though. The sound and video performance is generally very very good. Aptoide App Manager works very well in this build of AndEX Pie. So does the Netflix and Spotify app. I have unfortunately not been able to install Google Play Store and other GAPPS. Aptoide works as a good replacement for Google Play Store though.

MORE ABOUT AndEX Pie
My new compiled Android-x86_64 system (Pie 9.0) can run and be installed on almost all newer laptops (and some Desktop computers). For example Acer (Aspire), HP, Samsung, Dell, Toshiba, Lenovo, Thinkpad, Fujitsu, Panasonic and Asus laptops. You can (of course) also run AndEX in VirtualBox and/or VMware. I can also mention that I could run my new Pie version without problems on a HP Pavilion 500-317no Desktop Computer. You can very easy do a manual installation to hard drive. That can also be done to a drive where you already have another Linux system (for example Ubuntu 19.04) installed. Read more about how to install AndEX Pie below.

About the Bliss and the Android-x86 project – my sources
AndEX Pie is compiled by me with sources from Bliss – An Open Source OS, based on Android, that incorporates many customization options and added security features. All AndEX versions are also dependent of the Android-x86 Project’s activity and development. Following Bliss’s instructions you can build your own Android-x86 system. You can also (of course) download Bliss’s “original” image.

HOW TO do a simple manual installation (FRUGAL) of AndEX Pie to hard drive
The system’s install function does not work in AndEX Pie. You can, however, do a very simple manually installation to hard drive. To be able to do that you must have at least one Linux system installed on your hard drive. You must also use Grub as bootloader. Follow these steps.
1. Download the zip file andex_x86_64-pie-9.0-aptoide-netflix-spotify-clashofclans-1620mb-190326.zip or andex-x86_64-pie-9.0-aptoide-netflix-spotify-1580mb-190426.zip
2. Start up a Linux system (Ubuntu or…) on the computer where you want to have AndEX Pie installed.
3. Create a special partition for AndEX Pie or use the partition where you already have one Linux system installed. The one you just booted up or…
4. Extract andex_x86_64-pie-9.0-aptoide-netflix-spotify-clashofclans-1620mb-190326.zip to the root (/) of your new partition (formatted as ext4) or to the root of (for example) your Ubuntu system.
5. You will then have a folder called ANDEX-PIE-190326 or ANDEX-PIE-190426  with five files – the folder data, initrd.img, ramdisk.img, system.sfs and kernel – see the picture below. The folder /ANDEX-PIE-190326/data is very important! All your system changes will be saved to the folder data. You can’t even run the system without it. 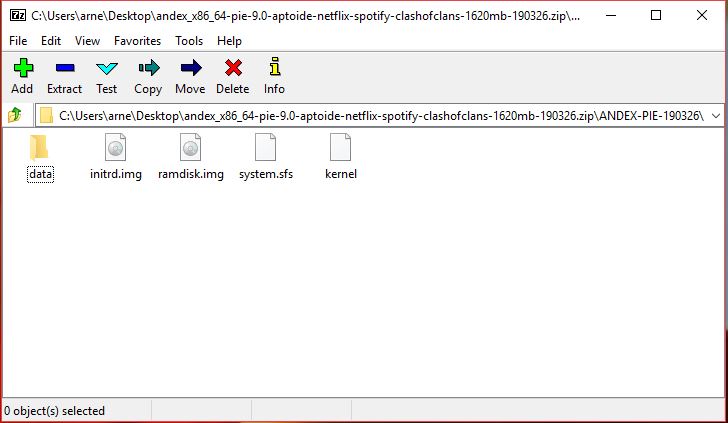 When you have the folder ANDEX-PIE-190426 in the right place it is time to configure Grub so you will be able to boot up AndEX Pie – see the examples below.

Manual installation of AndEX Pie in VirtualBox and/or VMware
You can (of course) also do a manual (FRUGAL) installation – as described above – also in VirtualBox and/or VMware. After such an installation everything will work very good. Do it like this.
1. Install a Linux system on a virtual partition of at least 20 GB in for example VirtualBox. Use Grub2 as boot loader. In this example I use ExLight Build 180214.
2. Start up ExLight and download the ZIP file andex_x86_64-pie-9.0-aptoide-netflix-spotify-clashofclans-1620mb-190326.zip to / – i.e. to the root of your filesystem.
3. Extract the Zip file. You will then have the folder ANDEX-PIE-190326. Delete the zip file.
4. Finally edit /boot/grub/grub.cfg as the example below shows. I.e. add these start lines to /boot/grub/grub.cfg:
menuentry ‘AndEX Pie 9.0 (sda1/VirtualBox-FRUGAL)’ {
load_video
insmod gzio
if [ x$grub_platform = xxen ]; then insmod xzio; insmod lzopio; fi
insmod part_msdos
insmod ext2
set root=’hd0,msdos1′
linux /ANDEX-PIE-190326/kernel root=/dev/ram0 androidboot.selinux=permissive androidboot.hardware=android_x86_64 SRC=/ANDEX-PIE-190326
initrd /ANDEX-PIE-190326/initrd.img
}

Power off the system
Just press gently on Ctrl Alt Delete keys simultaneously and you will get two alternatives. Power off or Restart. If not you can use the app PowerOff – screenshot.

Using Netflix
Note: When running AndEX Pie live (i.e. from a DVD or USB stick or live in VirtualBox or VMware) it can happen that you get an error message when you try to start Netflix. Just try again (up to about five times) and/or wait a few minutes. Everything will be alright after that. When running AndEX Pie from hard drive Netflix starts immediately when you want (with perfect video and sound quality). Note also: Whatever you do don’t try to upgrade Netflix. No other version than the one pre-installed will work. So don’t upgrade even if Aptoide wants you to do it.

About Facebook
The Facebook app works very well in AndEX. Just go get it with Aptoide App Manager.

What’s the point?
Well, if you like your Android phone and all the apps you have installed on it I’m sure you will also like to run apps from your laptop. Bigger screen and better sound etc. Also: In AndEX Pie Build 190326 many new apps and games can be installed via Aptoide App Manager. In AndEX Pie Build 190426 also via Yalp Store. You can even install very big games (of 1GB or so), but unfortunately almost all such games need a touchscreen. Still not convinced? Then read my article about “How useful an Androx-x86 system can be for the average computer user“.

NOTE2/WARNING2
Before you buy and download this version of AndEX Pie you must be aware of that not all apps downloaded via Yalp Store and Aptoide App Manager can run in an Android-x86_64 system. Some very big (around 1GB) games for example won’t run. You must also be aware of that some (many) games need a touchscreen. Clash of Clans and Angry Birds (pre-installed) work very well though.

And once again please note this
PREREQUISITE for manual installations
The system can be installed manually to hard drive – see above. That’s sort of a FRUGAL installation used by Puppy Linux. To be able to do a frugal installation you must have at least one Linux system installed on your hard drive. You must also use Grub as bootloader. Running AndEX Pie live: Use preferably Rufus to create a bootable USB stick from the ISO file andex_x86_64-pie-9.0-aptoide-netflix-spotify-clashofclans-1650mb-190326.iso. Or burn the ISO file to a DVD and run the system from it. While using/running Rufus in Windows it will look like this. 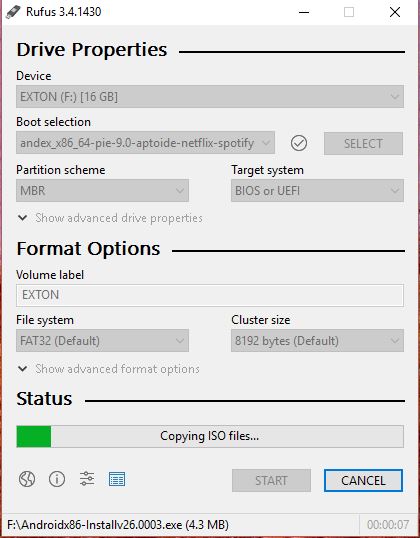 SCREENSHOTS re. Build 190426
1. First screen after boot
2. Screen after Pie Launcher is configured
3. The Desktop is ready
4. Showing all pre-installed apps
5. Yalp Store categories
6. Examples of games which can be installed via Yalp Store