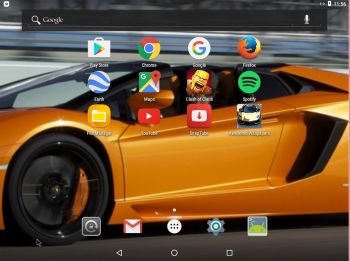 PREREQUISITE
Both systems have to be installed manually to hard drive. To be able to do that you must have at least one Linux system installed on your hard drive. You must also use Grub as bootloader.

ABOUT Andex Nougat 7.1.1
My compiled Android-x86_64 systems (Nougat 7.1.1) can run from hard drive on certain computers. They must be installed to hard drive and run from there. The systems can be installed on almost all newer laptops (and some Desktop computers). For example Acer (Aspire), HP, Samsung, Dell, Toshiba, Lenovo, Thinkpad, Fujitsu, Panasonic and Asus laptops. I can also mention that I could run my new Nougat versions without problems on a HP Pavilion 500-317no Desktop Computer. The Android-AndEX systems are distributed in the form of a Zip files. I.e. not as ISO files as the rest of my Linux distributions. You must do a manual installation to hard drive. That can even be done to a drive where you already have another Linux system (for example Ubuntu 17.04) installed. That’s sort of a Frugal Installation (normally used by Puppy Linux).

More about AndEX Nougat
Nougat 7.1.1 is the latest version of the Android mobile operating system developed by Google. I call my remaster of it AndEX Nougat. It uses “my” special kernel 4.11-rc7-exton-android-x86_64 with some extra features. I.e. extra drivers. My Android-x86 KitKat 4.4.4 build from 2016-02-14 will also cost you 9 $. It has one advantages over the Nougat and Marshmallow versions: The system can be used also on older laptops. Read more about the KitKat 4.4.4 version 160214 or DOWNLOAD it instantly.

Install the system to hard drive
Say for example that you have a laptop with Windows 10 and Ubuntu 17.04 installed as the only operating systems. If you just create one extra partition of about 5 GB you can install Android Nougat on this extra partition and then “dual-boot”. I.e. you can turn on your computer (called “booting it up”) and decide whether you want to start Windows, Ubuntu or Android Nougat. Please note that you’ll have to do the installation manually – see about that below. On the download site you can also download android_x86_64-7.1.1-nougat-gapps-kernel-4.11.rc7-exton-1030mb-170421.iso, but that’s only for testing purposes. You can install AndEX Nougat Build 170421 in VirtualBox and VMware directly from the ISO file, but the performance is poor. The system runs best in VMware Workstation Pro 12.5.5. You’ll have to start AndEX from the virtual hard drive in compatibility mode (nomodeset). Watch this screenshot showing the boot start process. And this screenshot when AndEX Build 170421 is up and running in VMware (installed from the ISO file).

What’s the point?
Well, if you like your Android phone and all the apps you have installed on it I’m sure you will also like to run apps from your laptop. Bigger screen and better sound etc. Also: In AndEX Nougat Build 170423/170422 almost all apps and games can be installed via Google Play Store. You can even install very big games (of 1GB or so), but unfortunately almost all such games need a touchscreen. Still not convinced? Then read my article about “How useful an Androx-x86 system can be for the average computer user“.

And once again please note this
PREREQUISITE
Both systems have to be installed manually to hard drive. To be able to do that you must have at least one Linux system installed on your hard drive. You must also use Grub as bootloader.